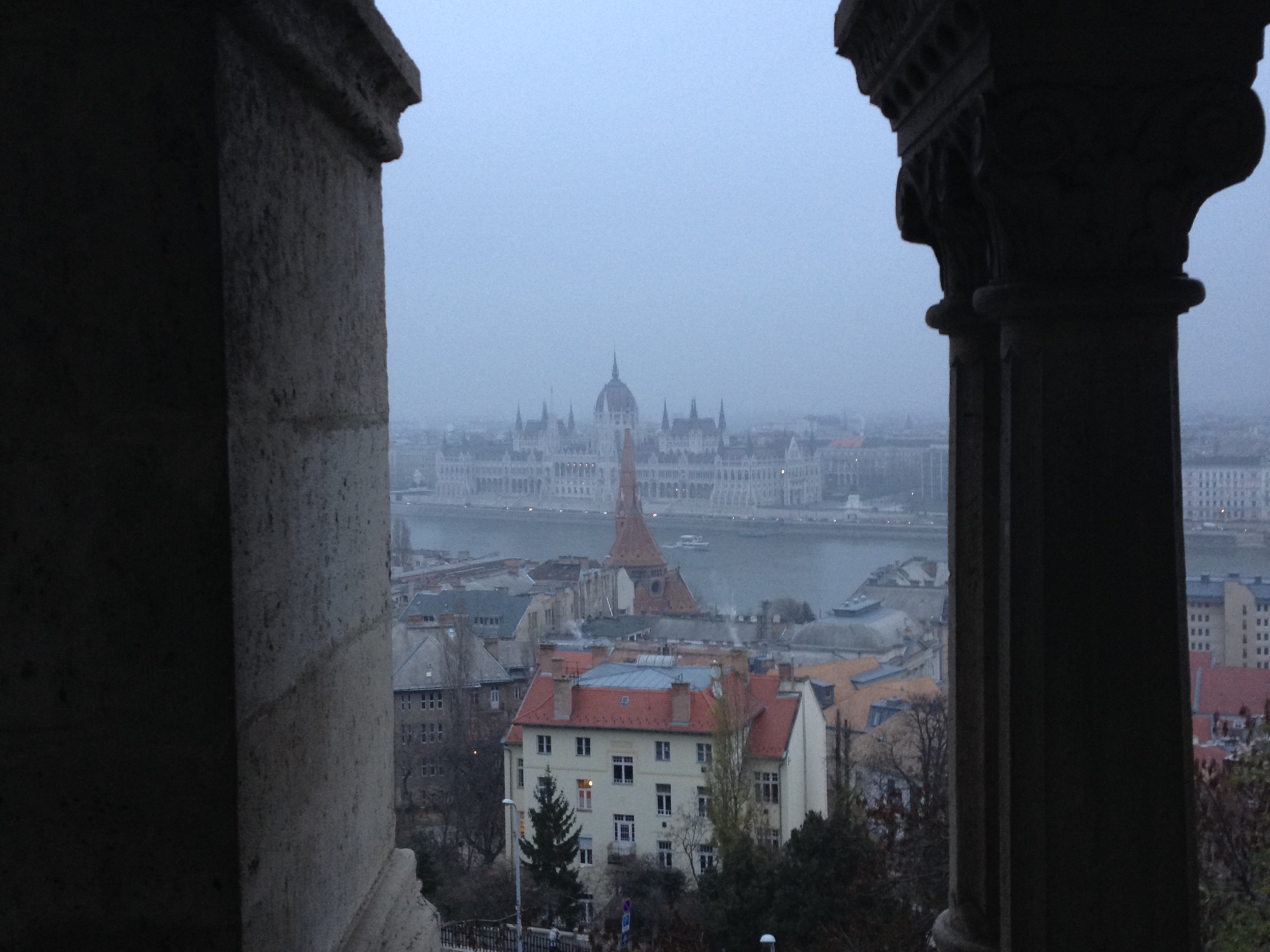 Budapest. Say it with me now; Boo-dah-pesht.

I’m going to let Anthony B. introduce it as I’d just be echoing him anyway:

Once we stepped off the plane, we were struck by how familiar the climate felt, with the temperature hovering around zero and a lack of humidity very similar to a Toronto winter. Intrepid Canadians, we’d brought our A-game; winter coats, scarves, gloves and hats and were perfectly content.

With Christmas less than 10 days away, the city was filled with fairy lights – wrapped around trees marching down major avenues, festooned in café windows and showering down the sides of five-star hotels. Christmas markets were filled with stands selling mulled wine, goulash, kielbasa and tins of paprika.

Taking advantage of Central Europe’s affordability and the off-season, we splurged on a five-star hotel, the Corinthia. While booking it, I couldn’t get scenes from The Grand Budapest Hotel out of my head and was floored to discover this article in Condé Nast Traveler a few moments later. We’re used to staying in three-star hotels in Europe, so this was definitely a new, luxurious experience for us.

We walked and walked down streets filled with distinctive architecture, everything from Gothic and Neo-Gothic to Art Nouveau, looking up at building after building, detail after detail. The chilly nights were certainly helped by mulled wine in paper cups – although it’s not legal to walk around with open alcohol, strict regulations weren’t in place at the Christmas markets (no enclosed, licensed areas like Toronto would have), so we could keep warm as we wandered. I noticed many restaurants and cafés had heated patios; each chair with a blanket neatly folded on it – a nice touch.

Check out 29 Places That Prove Budapest Is the Most Stunning City in Europe (BuzzFeed) for some incredible photography – my version of buying postcards to supplement my own trip photos.

And I know his voiceover can come across as a bit hokey, but Rick Steves is brilliant, especially his books. He’s responsible for convincing us to travel with only carry-on suitcases, which makes everything from sprinting across airports to dealing with out-of-order escalators so much easier. 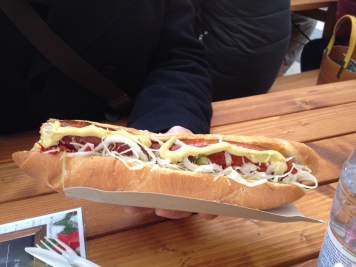 I didn’t do a huge amount of research on what to eat before we arrived, but we did well with quick jumps onto TripAdvisor (WiFi was plentiful) and trying random places that looked good when we were hungry, including stalls at the Christmas market.

Regős Vendéglő – an excellent example of the rewards that await when you walk a few blocks off the beaten path. Traditional Hungarian menu. Great service, excellent goulash, and I stole a few of Jeff’s potato croquettes. HT to our friend Nick, who tweeted about it on his earlier trip. 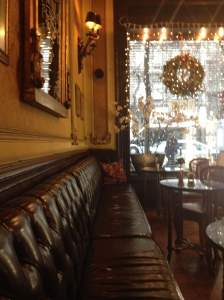 his is my newest “happy place”. Excellent ambiance; comfy seating; perfect tea in a well-proportioned china teacup; subtle approval of Jeff’s choice of whisky. I can see this café being incredibly busy during high tourist season, but it was only quietly buzzing both times we visited. On our first visit we shared the space with another couple poring over maps of Istanbul. The following morning we returned for a cup of tea and a croissant to supplement a too-small breakfast elsewhere.

New York Kávéház & Étterem – aka New York Café. This was our first stop after checking in down the street at our hotel. You can also see it in Anthony Bourdain’s video above. We didn’t stop here for long but had a quick snack in stunning splendour. Rarely has there been such a large disconnect between my desire for quick re-fueling and our surroundings, but when I get “hangry”, any port in a storm will do. And boy, did this ever do.

Farm Gastrobar – wonderful place to go for cocktails. Great service, amazing cocktail menu, nice selection of whiskies and bourbon. Lots of outdoor space in the courtyard – I’d love to go back in the summer.

Spiler BistroPub – this was one of our favourite discoveries while on our way to somewhere else. We saw a pedestrian walkway with lots of bright hanging lanterns, and followed the lights into another world: Gozsdu Udvar (Gozsdu Courtyard). Spiler’s menu, split into West Side and East Side options, is a play on the Budapest’s historical crossroads of Eastern and Western worlds, offering  both traditional Hungarian and ‘western’ food, and ‘eastern’ Asian dishes. Sitting on a winterised patio with heat lamps, I was perfectly warm, especially once I had a blanket covering my lap and legs.

Cat Café Budapest – just go. You know you want to pet a kitty. Unless you’re allergic. Then don’t go.

Széchenyi Thermal Baths  – super fun, especially as the weather was about 2 or 3 degrees celsius and the water was 34 degrees. We read a few negative TripAdvisor reviews, mainly people who were a bit confused by the place, but we didn’t have any trouble and found everything made perfect sense. We did some planning and that helped. We had packed bathing suits and flip flops, and our hotel said it was okay for us to bring their towels along, which was really nice of them. We rented a cabin to change in, unlocked by waterproof bracelets (almost like a swatch watch) provided when admission is paid. The cabin was quite tiny, and I would recommend only getting a cabin with someone you are intimate with (or take turns). It felt more secure than the men’s and women’s locker rooms might have, plus we wanted to stay together. Some reviews complained of theft, so we left our valuables and phones in our hotel room just in case.

As a bonus, take the continent’s first Metro, the M1 (yellow line), to get there.

Budapest Eye – can’t miss it when you’re wandering around, no queue when we went, great views.

St. Stephen’s Basilica – after a quick peek inside, we bought tickets to an organ concert taking place the following evening. It opened with Bach’s Toccata and Fugue in D minor  (recorded at a different cathedral) – what a way to showcase both the pipe organ and the basilica’s acoustics! Sent a chill down my spine.

Fisherman’s Bastion – source of my opening photo. A must.

Important but not fun:

House of Terror – my parents were both young children during the Nazi’s occupation of the Netherlands, so I am more familiar with what happened there during the second world war than I was with Hungary’s history. Visiting this museum was an emotional experience and afterward, while walking past people on the street it was surreal to realise that most of them had lived through, at very least, the communist regime, if not the fascist one too. Well-curated museum with excellent music throughout – underscored the feeling of fear and dread.

One thought on “Budapest”